What Happens When We Release A Bird

As soon as we receive an injured or sick bird, we assess its condition and determine if it is appropriate for rehabilitation. For birds we can help, we provide a clean cage and appropriate hydration or food.  We also chart the species, approximate age (i.e. nestling, fledgling etc.), weight, and the times we have fed it to make sure it is getting proper nutrients and regaining strength. Once a bird shows clear signs that it is self-sufficient (orphans) or recovered from its injuries or sickness (adults), it’s ready to be released. We flight-test the bird, make sure it is picking up and eating food on its own, and then make a release decision.

But we often wonder what happens to the birds we rehab once they are released.  We have a couple frequent visitors who come back to say hi, and grab a snack while they are here. Recently, there’s been a blue jay that we’ve nick-named Frankie that comes to visit us. Frankie came in earlier this year as one of the victims of the unknown bird disease. Frankie had mild symptoms: its eyes were not crusted over yet, and we immediately treated it with antibiotics. We kept Frankie outside, separated from the healthy birds. Frankie stayed with us for about two weeks, and we released it once its symptoms went away and we were confident it wouldn’t spread the disease further. We also made sure it had learned to scavenge, hunt and fly on its own. Now Frankie comes to visit every week or so to say hi, especially when it is raining as he can hide under the porch eaves to stay dry. Frankie and Admiral Ackbar (our educational blue jay) will often have conversations when Frankie comes to visit as well.

Another bird that came to visit us for a while was a brown thrasher our Director, Catherine, nick-named Millie. Millie came in as a fledgling and after she was released, she came back a few times a week and would squawk until she got fed. Millie is short for Millennial because she had a hard time leaving home and being independent. After a couple weeks she stopped coming by, we assume because she finally made some thrasher friends and was self-sufficient enough to find food on her own. 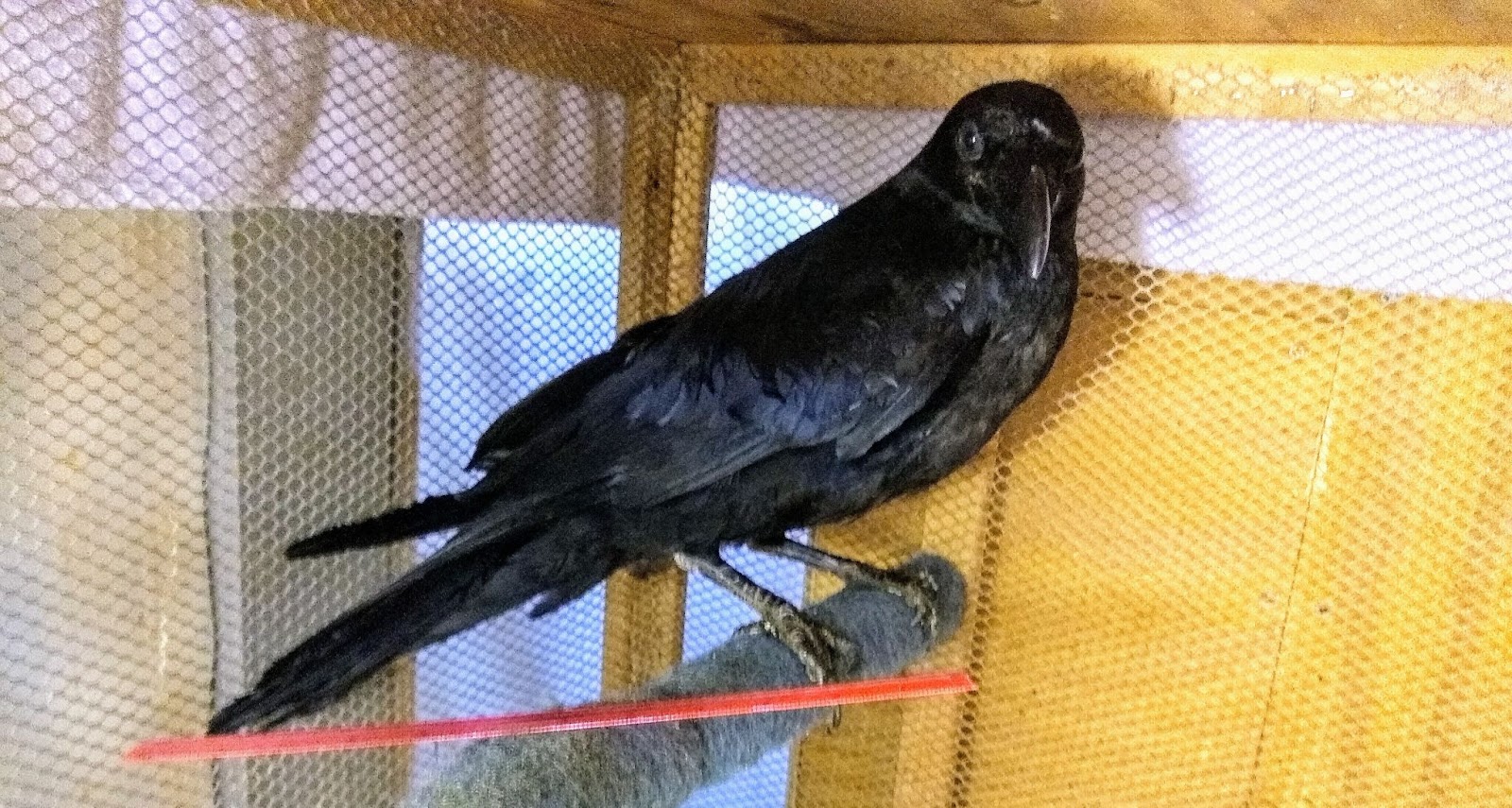 Ollie the raven when he first arrived at Diva Crows

Diva Crows has received lots of calls over the years from people who have found “ravens.” They all turned out to be crows until Ollivander (or Ollie for short). Our Director opened the box that he came in expecting another crow and found an enormous bird — Diva Crows’ first raven.  We received Ollie last June/July because he had a coracoid injury, which is an injury to the sternum bone, that healed incorrectly, meaning Ollie couldn’t fly well enough to survive on his own. At first we nick-named him Peanut, because his favorite food was a peanut with peanut butter on it. Ollie was very timid and would shake around us, as he associated us with bad tasting medicine and unpleasant physical therapy. Habituating an adult corvid to captivity is difficult and requires consistent one-on-one training to ensure quality of life. Due to this, we decided to transfer him to Leesburg Animal Park so they could provide him with the level of attention he needed. Now, Ollie is doing great and getting lots of enrichment; he has been practicing stepping onto a scale so he can be weighed, according to Becky Shore, Curator at Leesburg Animal Park. “He is an amazing bird and definitely a favorite here,” said Shore. If you’re in the area, give Ollie a visit!

One bird that we previously released that is now back with us is Tumbleweed. Tumbleweed is an educational Robin who originally came in during the summer of 2017 as a nestling. As it grew, we noticed that one wing was smaller than the other, inhibiting its ability to fly well enough to be releasable. We searched for a placement for Tumbleweed and it was placed at Long Branch Nature Center & Park in Arlington, Virginia. Last year, the nature center had to temporarily close due to Covid, and we received Tumbleweed to watch while they were shut down. We are still watching over Tumbleweed and enjoying its company for the time being.

In the nine years that Diva Crows has been operating, we have seen hundreds of birds come and go. Rehab work is not easy, but releasing the bird back into the wild brings joy to our hearts. We love to see some birds that we have helped come back to pay a visit. Diva Crows’ work is made possible through donations. To make a donation, click the ‘Donation’ tab on our website or look in our social media bios.